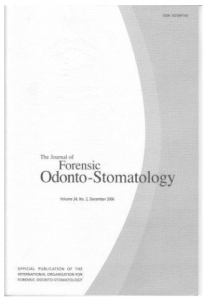 A new website to aid the interpretation of ante-mortem dental records: www.internationaldentalcharts.org

The INTERPOL (International Police Organization) Disaster Victim Identification forms represent a global standard for mass disasters and the collection of international ante-mortem dental records. These records can now be interpreted more easily with the help of a new online dictionary of dental terminology for translating dental charts from several languages into English. The free website launched in 2013 (www.internationaldentalcharts.org) is the result of a M.Sc project on international dental charts: Guide of International Dental Charts translated into English –- decoding international ante-mortem dental charts for INTERPOL’s Ante-mortem (AM) Disaster Victim Identification (DVI) forms (Section F2), completed in 2011. The aim of this study was to analyze the tooth numbering system, symbols and abbreviations used on dental charting worldwide. A letter was sent to the national dental associations of the 188 INTERPOL member countries, addressing the goals of the project and asking for samples of dental charts. A total of 45 countries replied and 32 common dental alterations were selected for translation, such as: decay, filling and extraction. Their symbols and/or abbreviations used were summarized in various languages. More than one system of dental notations was used in the same country whereas there was an absence of standard systems in other countries. Some of the samples of charts received were of little value. However, a fair amount of useful information and detail was found in most of them. This free consultation website could be useful when the handwriting, symbols, and abbreviations on the ante-mortem dental charts are not clear. It will be particularly applicable when ante-mortem x-rays and casts are not available.